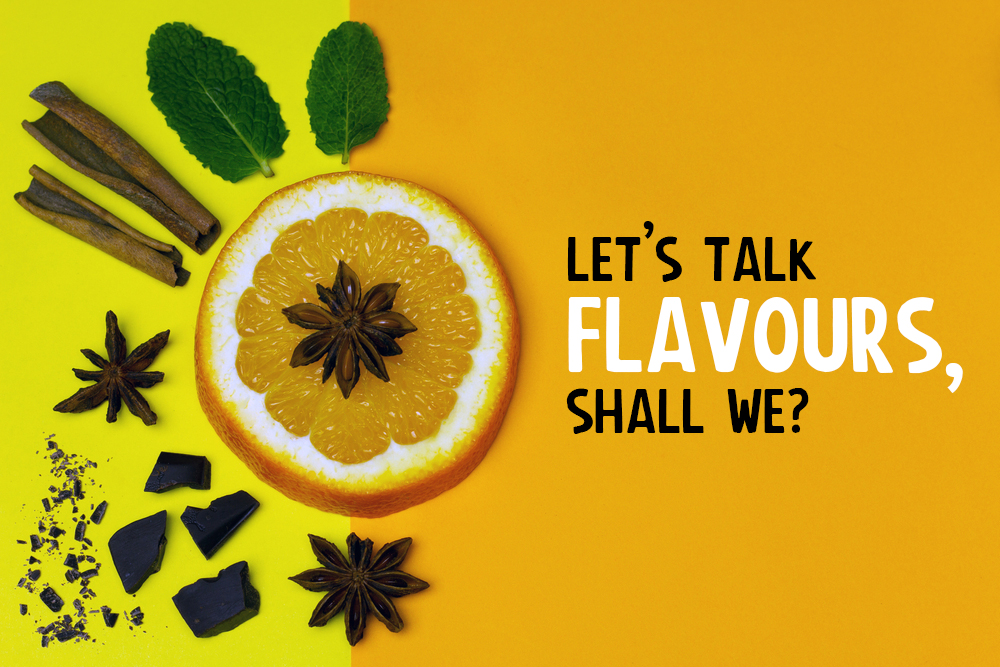 Have you ever thought about why some foods make us feel happier than the others? (Humming the song , I-want-you-to-be-happier!!) The same mood-lifting effect when you cook or bake?

Our body has a positive physiological and psychological response to some pleasant aromas. That’s the reason people stop to smell flowers. Another best example is lighting incense sticks at home, a common practice in India.

When it comes to food, it’s not only the aroma that builds up the feel-good factor but the overall flavour which makes your experience delectable!

Flavour Science describes Flavour as a combination of aroma and taste of the food. If you want to sound more technical, here is the tongue-twister kind of definition: “Flavour science is a multidisciplinary subject encompassing biochemical, chemical and physical aspects of food science, the organic chemistry of natural products as well as the physiology and psychology of sensory perception”. And, it’s an evolving science and so the evolving definitions .

Flavourful natural ingredients – be it a fruit or spice or tea or coffee contains certain specific organic compounds that contribute to their characteristic flavour. Volatile compounds are the ones that can evaporate into the atmosphere and perceived as aroma through the sense of smell. And taste is perceived through non-volatile compounds in the food that come in contact with tiny taste buds in the mouth. On an average, the human tongue has 2,000-8,000 taste buds with a lifespan of 10 days. Taste buds die off and regenerate every couple of weeks (sometimes more frequently, given their vulnerable position in the mouth). Essentially, every time you burn or chomp down on your tongue you kill off more taste buds. So remember this when you sip your steaming cup of tea next time.

Cinnamon & Apple, Caramel & Vanilla, Raspberry & Chocolate are some of the most famous flavour combinations. Researchers in the food industry have been continuously trying to create interesting new flavours and combinations that will appeal to the customers. Some of the unique combinations that have emerged through  flavour pairing are Blue cheese-Chocolate, Strawberry-Basil and Miso-Caramel. These flavour combinations may look weird at first sight, but, when used in either a sweet or savoury dish it delights the senses in a brilliant way. Strawberry & Basil can go well in a burger as much as it would do in a lemonade.

But how can we be so sure about a particular flavour or flavour combinations for a product? There is a concept of flavour theory which says, if the majority of flavour components in two different ingredients are similar, then there is a very good probability they will pair well in a dish. But flavour pairing is not just limited to that, sometimes contrasting but complementing flavour combinations also creates wonders. Contrasting flavours are used to balance out the strong dominant ingredients. For example, adding jaggery to a bitter gourd dish or adding sugar to a tangy curry.

This makes us realise that there are various factors to consider in order to create an enjoyable flavour combination. To discover new and successful flavour combinations, we have to use a multitude of approaches like pairing up similar ingredients, combining the contrasting ones, understanding the role of textural and functional properties of the ingredient in flavour delivery, using a new ingredient to marry other two flavours…Think of a Pumpkin Spiced Latte where Cinnamon, Clove & Nutmeg combined together enhances the earthy pumpkin flavour which would otherwise go unnoticed.

Adding to these aspects, tagging the origin of flavours and their health benefits will also be critical to predict a flavour match. Hence, it will be really helpful to have a more nuanced theory explaining the use of ingredients in a variety of cuisines to understand the compatibility between ingredients. How much we try to set logic through some theories in flavour science, some level of creativity is definitely needed to discover magical flavours and combinations. Given the recent advancement in analytical methods of flavour characterization , we can expect more interesting flavour creations backed by scientific reasoning in the coming years .

Okay! Now that we have talked about the theoretical part of flavour science, why wait to start your own experimentation with flavours in your kitchen? Let us know in the comments the delightful weird flavour combinations you have discovered or tasted.

Did you find apk for android? You can find new Free Android Games and apps.
Tags:aromacombinationsflavourfood technologysciencetaste
Share this...