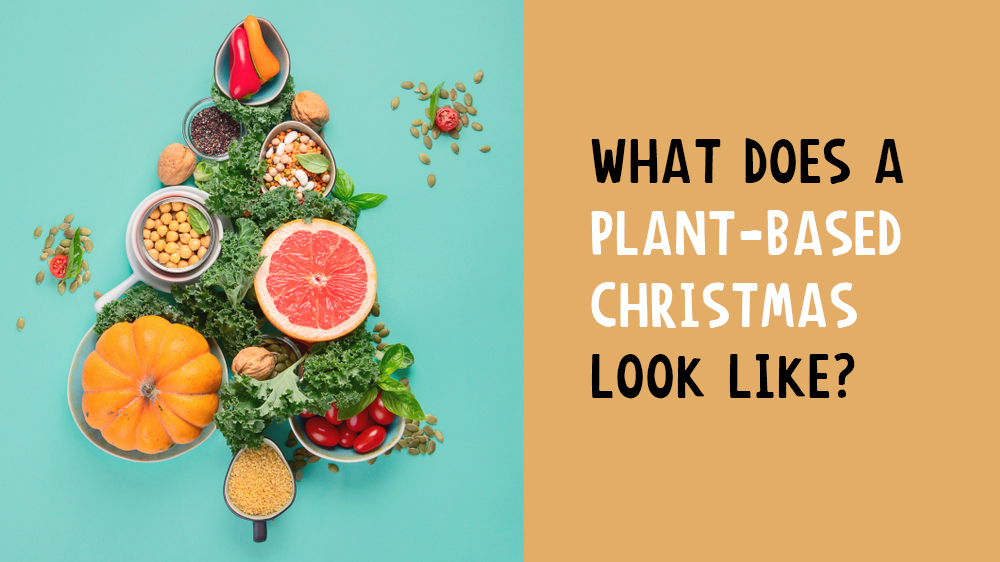 One of my early memories of Christmas celebrations, apart from the ones at my convent school, is being invited for lunch at my classmate’s home. This happened when I was in my 5th grade, guess it justifies the term early memory!

I still remember relishing the coconut milk rice prepared by her mom along with the chicken curry and ending the meal with lots of cake. Had I been invited now, I could indulge only in the coconut milk rice- yes , I gave up non-vegetarian food from the last few months. It was for a lot of convincing reasons that my mind could come up with.

Being in this Christmassy vibe for the last one week, I was thinking how it would be, if the Christmas delicacies are made entirely plant-based or if it is too much at a time, just partly plant-based , maybe?

Let’s imagine a typical Christmas lunch at an Indian house-hold and how it might look if it’s made plant based. Again, not necessarily every dish on the table has to dress up the plant-based way, think of one or two dishes this year. If you are walking through your imagination of a Christmas feast, you are seeing platters of baked goodies, various meat preparations and the good old wine. Regional cuisines in India call for varied elaborate recipes but the menu revolves around three major things- Meat, Cake and Wine!

Think of indulgence, think of cake! So, let’s talk about cake first. I started searching for cake recipes which don’t contain egg, still being okay with the inclusion of milk. Remember – I said partly plant-based, a slow and steady transition. Although my will says ‘make the transition over night’, my mind compels me to do it the scientific way. After an intensive search, I have mixed up the recipes that I came across and customised it my own way. And this is how it looks..If you guys have a tried & tested recipe for a vegan christmas cake, share the link in the comments please:) would love to try it out.

Moving on to the second major ingredient that is widely used in Christmas cooking, the meat. There are two types of people to consider here, a non-vegetarian who is trying to go plant-based will prefer to replace meat in his meals without having to compromise on the meaty experience. And the other category of people who are already vegetarian, just looking to add variety to their menu. Being a vegetarian in India has never been difficult, as lots of our traditional recipes are vegan by their nature. But who doesn’t want a novelty on the table!

So, here is a list of interesting plant-based ingredients used globally that can find a place in your kitchen this Christmas! Taking inspiration from the versatile vegetarian ingredients used around the world and Indianizing it according to our taste is my thought behind choosing these.

Plant-based food establishments in India have designed meat alternatives suitable for the Indian palate and made it easily available. Plant meat has the texture and taste similar to meat but is made from completely vegan sources. It provides good amounts of protein with a lesser fat content. This is the ideal option if you experience the feeling of eating meat without actually eating meat. Not too much to  stress on understanding the cooking part of it, because it goes well with most of the traditional meat dishes consumed in Indian households during Christmas – Biryani, Stews, Sukka, Chettinad, Kosha Mongsho, Malnad curry or even a meat pie.

If you are someone who would love to explore different textures and tastes other than the regularly available vegetable options or meat, the following ingredients might be exciting for you.

My introduction to Lotus stem happened when my food tech degree batchmate was working with it for his final semester project. Fast forward to 2022, now I’m ordering it at restaurants in the form of starters- Honey Chilli Crisps, Thai Basil lotus stems, Yeongeun Bokkeum (Korean style) has become one of my favourites.

Lotus stems entered Kashmiri kitchens around the 15th century and are widely being used in  Indian, Chinese and Japanese cuisine. It is fiber rich, which aids in digestive health, and has carbs that provide energy. They also contain vitamin C, vitamin B, manganese, zinc, iron, copper, potassium, and magnesium.

You can fry it into tempura, stir-fry with sauce of your liking, steam, braise, boil or bake into chips. Make sure to blanch or soak it in vinegar water before use to remove slight bitterness and prevent discolouration. Interestingly, it can be made into vegetarian kofta along with a spicy gravy.

The fleshy and fibrous texture of mushrooms make them taste similar to meat. Mushrooms are protein-rich, have lesser fat content and contain Vitamin B and D. (Fun fact – Mushrooms can naturally produce Vitamin D if grown under sunlight or exposed to UV light). The umami rich ingredient is easy to use and works well in a creamy gravy, in a pasta or pulao, as a kebab or in stews. My suggestion with mushrooms is to stir fry it in a store bought schezwan sauce or add it to a biryani for the flavourful explosion. You can also try cooking with different varieties of mushrooms available in India, apart from the white button mushroom, like Portobello, Shiitake, Oyster, Enoki, Porcini etc, to kindle your innovative side.

From pudding to pan fry to curries to biryanis, raw banana can work in almost any dish because of its neutral taste. Some people use it as a fish alternative in curries or tawa fry due to its fibrous texture. It is rich in dietary fibre and hence makes you feel full for longer hours. However, if you are not used to so much fibre in your diet, make a gradual increase in dietary fibre intake.

Apart from these ingredients mentioned above, there are a lot more interesting vegetarian delights that can be explored further. For example, Chickpea is another versatile ingredient which can turn into tikkis and provides protein and fibre. The exploration when it comes to food is never ending. With the growing number of plant-based meat options available for people to experiment with, it is plausible to say that the typical Christmas dinner in the near future can be completely plant-based.

May this holiday season be filled with moments of joy, happiness, love, good vibes and exploration.

Did you find apk for android? You can find new Free Android Games and apps.
Tags:christmascruelty freenutritionplant basedplant based lifestylesustainableveganism
Share this...